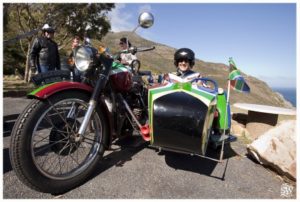 You can ask any jetsetter who lives in South Africa, and you will get the same response. After travelling the world and visiting some exquisite destinations, the heart pulls you back home to our beautiful country. With diverse terrain, golden beaches, crystal blue waters, magnificent mountains, beautiful valleys, vast savannahs, and lush forests and a spectacular climate, South Africa is heaven on earth.

Whether you’re visiting South Africa, or whether you’re looking for a staycation adventure nearby, there are many ways to see and experience our wonderful country.

Get on the back of a vintage World War II sidecar and enjoy a two hour ride along the peninsula, taking you from the Waterfront to the Atlantic Seaboard, Camps Bay, Hout Bay, and Chapman’s Peak lookout. You can choose to return via Constantia, Rhodes Memorial or via Signal Hill.

If you’re in Gauteng, book a scenic 20-minute helicopter flight over The Cradle of Humankind World Heritage Site, which is believed to be the birthplace of humanity.

You can also see the Mother City from a completely different perspective in a gyroplane – which is totally different to a helicopter. A gyrocopter zips around the skies much like an aerial motorbike with a freely turning rotary wing.

Durban is home to the Moses Mabhida Stadium, the Golden Mile and uShaka Marine World. Now you can view these incredible sights from the deck of a 58 foot catamaran. Starting from the harbour channel, this fun-filled deep sea cruise lasts for approximately one hour.

to four friends fly from Stellenbosch, over Chapman’s Peak Drive, and towards the sandy shores of Hout Bay and over the majestic Twelve Apostles. After traveling over Signal Hill and Table Mountain, you will fly to Robben Island, where you will turn back to return to Stellenbosch.

Remember to bring your camera when you take in these incredible views.

The Scone Shack makes for the perfect social dista

Be very clear about what it is that you want & tak

I bet you feel the same way? 💜

I cannot think of a more heavenly place to be work

Not sure who is more bleak, me having to share a f

One of the many amazing miracles I find in the mou

The incessant stress of 2020 has taught me just ho

Tonight is the perfect night to enjoy a rooftop ex

We are celebrating our year end function with an o